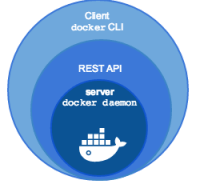 Docker is an excellent tool to deploy apps to servers with tight control over its environment. Apps run inside containers, and have access to a file system, libraries and operating system pre-defined by a Dockerfile. Docker is also available for Mac and PC, which means we can run linux apps on these systems without installing a virtual machine.

Since the apps require a linux environment, docker does not run natively in Mac and PC. Rather, it sets up a linux virtual machine and runs docker engine inside that. Before version 1.12, docker on Mac required installation of virtualbox and docker-machine to manage this linux virtual machine inside which the containers are run. However, latest version of docker for mac uses hypervisor to run operating system as a service and thus has more native feel. Lets install it using Homebrew:

Run the app from the launcher and it will go through the initial setup process. We can now interact with the docker daemon through the shell.

Next, we will pull a debian image and install gimp and inkscape in it. Open a terminal and create a Dockerfile inside a folder called apps.

To run graphics inside docker containers, we will need X11 running on Mac. At the time of this writing the stable version of XQuartz (2.7.9) has a bug which prevents graphics forwarding. However, 2.7.10_beta2 works.

The stable version of xquartz may work if it is higher than 2.7.10. Check the version in home-brew by: brew cask info quartz.

Start XQuartz and allow connections from network clients in preferences > security. Now the following commands should get gimp running:

This will also share the ~/Downloads folder with the container. To run inkscape:

Any changes made to gimp itself will be lost when the app is closed. Any additional plugins or customizations should be included in the Dockerfile to make them permanent.

Your email address will not be published. Required fields are marked *